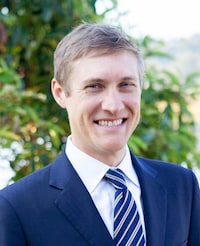 Andrew Davies is an attorney at The Zinn Law Firm where he focuses his practice on personal injury cases including injury accident, medical malpractice, and elder abuse cases.

A Bay Area native, Mr. Davies graduated cum laude from Santa Clara University in 2002 with a degree in political science and a minor in French language. He subsequently attended Loyola University College of Law, New Orleans where he obtained degrees in both Common Law and Civil Law. In law school, Andrew was a Moot Court staff member and was also a member of a successful Moot Court competition team. In his final year in law school, he competed in the Thurgood Marshall Federal Bar Moot Court Competition in Washington, D.C., where he won awards as top oralist and brief writer. While in law school, Andrew simultaneously worked as a trial section Law Clerk at the Office of the District Attorney in New Orleans, Louisiana. Upon graduation from Loyola, Andrew was selected as a member of the St. Thomas More American Inn of Court and the Order of Barristers for his professionalism and excellence in oral advocacy and brief writing. Andrew also gained experience in the areas of tax and estate planning law.

Following graduation from law school in 2007, Mr. Davies returned to the Bay Area, where he began working at The Zinn Law Firm as a Law Clerk. He earned his license to practice law in 2008 and has since dedicated his practice to advocacy for individuals who have been injured to others’ fault. After working with Carter Zinn for nearly a decade, Mr, Davies has sharply honed his discovery, litigation, and courtroom skills. He has independently handled dozens of matters from intake to final resolution while also working in close collaboration with Mr. Zinn and the rest of the team at The Zinn Law Firm.

Andrew’s interest in personal injury advocacy stems from his background as a competitive cyclist. His experience working in bicycle shops as a youth where he assembled thousands of bicycles, his profound knowledge of the sport and industry, and his passion for winning as a racer provide him with unique insight and advantages when it comes to litigation and bicycle accident cases.

Outside of his work, Andrew continues to enjoy cycling, music, traveling and spending time with his wife and children.