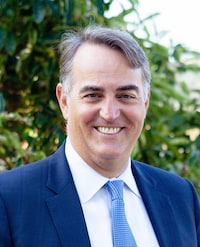 Principal and founding attorney Carter Zinn was born and raised in Berkeley, California and a graduate of Berkeley High School. In 1988, he obtained a B.A. in Political Economy from Williams College in Massachusetts. He then returned to the Bay Area to teach high school in Oakland, CA, after which he was admitted to the Harvard Law School where he began his legal education. Due to a family member’s medical needs, he took leave from Harvard to move back home and complete his J.D. at University of California Berkeley’s School of Law (Boalt Hall) in 1999.

Unlike many of his law school classmates at Harvard and Berkeley who aspired to obtaining jobs at large law firms representing corporations, Mr. Zinn always wanted to be a personal injury attorney, taking cases to trial, and representing people who really needed his help and where he could stand out and make a difference. After graduation, Mr. Zinn decided to start out by training and learning in a larger law firm setting that he knew would demand the highest professional standards before he undertook to represent his own individual clients. He began his legal career as a litigation associate at the San Francisco office of Heller Ehrman LLP, one of the oldest and most prestigious San Francisco law firms.

The Zinn Law Firm was Born from Mr. Zinn’s Own Bicycle Accident

While at Levy Ram & Olson, Mr. Zinn represented himself in a bicycle accident case in which he was involved. Mr. Zinn learned from the experience, and in 2003, he took the modest proceeds from his case to realize his dream of opening his own personal injury practice focusing exclusively on representing seriously injured individuals. Since 2003, with three attorneys and full time staff working together, The Zinn Law Firm has resolved by settlement, trial or arbitration hundreds of cases in their clients’ favor, awarding them tens of millions of dollars in the process.

Based on several early accomplishments and trial results, Mr. Zinn has been recognized as one of the most well-regarded and sought after trial lawyers representing injured persons in the Bay Area. In 2005, Mr. Zinn was singled out as one of the top three young trial lawyers in San Francisco. In 2009, Mr. Zinn was selected as a Rising Star in Northern California by Law and Politics Magazine. Starting in 2010 and his first year of eligibility, Mr. Zinn has been consistently chosen as a Super Lawyer by the same publication. Only 5% of attorneys in California are selected as Super Lawyers. Based on his consistent record in delivering results for his clients at trial and in settlement, Mr. Zinn was invited to serve on the Board of Governors for the Consumer Attorneys of California (CAOC), a position he held for three years. Mr. Zinn has also been a long-term member of the San Francisco Trial Lawyers Association (SFTLA) and the American Association for Justice, the national trial attorneys advocacy group. Mr. Zinn is active in CAOC lobbying California lawmakers to enact laws to protect consumer’s rights, and in interviewing local candidates for statewide office as part of CAOC’s political endorsement process.

Mr. Zinn has been invited by SFTLA and CAOC to lecture at a number of continuing legal education presentations for other trial attorneys. For multiple years, he has been a lead presenter on the annual Lien MCLE panel sponsored by SFTLA. He has been a frequent panelist on the CAOC Kaiser Medical Malpractice MCLE Program, and he has also served on the SFTLA Kaiser Subcommittee and the SFTLA Committee on Alternative Dispute Resolution Oversight.

Based on his academic record and reputation in the trial lawyer community, Mr. Zinn has also been invited to teach at some of the Bay Areas’ most well-regarded law schools, including Hastings College of the Law and U.C. Berkeley’s School of Law . Mr. Zinn is an adjunct faculty member at the University of California, Hastings College of the Law in San Francisco where he teaches a course in Medical Malpractice Litigation.

Due to his interest and experience with advocating for the rights of bicyclists and working to improve Bay Area streets for all users, in 2013 Mr. Zinn was chosen to serve on the City of Mill Valley Bicycle and Pedestrian Advisory Commission. Through multiple years of service, including Chairman of the BPAC, Mr. Zinn has been instrumental in obtaining much needed bicycle and pedestrian improvements throughout the area.

Mr. Zinn lives with his wife and two children in Mill Valley, CA where he gets to ride his bicycle regularly and hike Mt Tamalpais in between little league practices, golf rounds and Giants games.