WE CARE • WE COMMIT • WE WIN Contact Us NowFor a Free Consultation
Home
Results
The U.C. Regents and the City and County of San Francisco Agreed to Pay $1.5 Million Settlement for Man Paralyzed Due to Medical Mistakes at San Francisco General Hospital

The U.C. Regents and the City and County of San Francisco Agreed to Pay $1.5 Million Settlement for Man Paralyzed Due to Medical Mistakes at San Francisco General Hospital 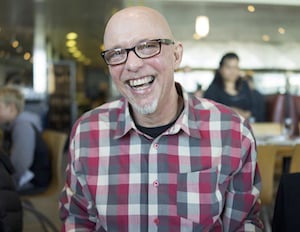 “Many of us have difficult jobs that can be emotionally challenging at times. This is certainly true when, like us, you choose to dedicate your career to helping people who are badly injured due to mistakes made by others. But after practicing law for 17 years, no single case has challenged us on an emotional level more than that of our dear friend and former client, David Zeller.
- Carter Zinn

David Zeller was one of thousands of San Franciscans who has fallen through the cracks. He grew up in an abusive household in Indiana in the 1960s and 1970s. His mother died when David was still young from her severe alcoholism. David pulled himself up by his bootstraps, and earned a B.A. from Indiana University in 1987. Like so many others seeking better lives and opportunities for themselves, he eventually found his way to San Francisco, moving here in the early 1990s. David started out working in his chosen field of photo journalism working in a photo print studio. He eventually left that work, and for the last 15 years was driving a Luxor Cab in San Francisco. If you have lived in the Bay Area long enough, you may have been one of his passengers. David was bright and engaging, and would hold forth on politics, existential philosophy, or whatever topic may have been on your mind.

Like many other Americans in 2012 before the passage of the Affordable Care Act, one thing David did not have at the time was medical insurance. So when he started having increasing back pain, he relied on San Francisco community clinics and San Francisco General Hospital for his medical care. On the morning of March 16, 2012, David’s knees buckled and he could not walk easily. He called 911 and was taken to San Francisco General Hospital for evaluation and treatment. He was put in a hallway in the Emergency Department and waited all day to get the spinal MRI he required. He was able to move his legs and had full sensation in them. Finally, around 7 p.m. that night, he was taken to get his MRI. Tragically, the MRI technician responsible for his care tried to move David from his gurney to the MRI table by pushing and shoving him, instead of asking for assistance and using a rigid “slider board” as the standard of care required. David experienced severe, sudden, stabbing pain in his spine during the transfer from gurney to MRI table. Instead of stopping the process and getting help in response to David’s screams, the MRI technician told him he was almost there, and continued to push and shove David from the gurney to the table.

David experienced so much pain in his back at this point that he nearly passed out during the MRI. He was given pain medicine, and the study continued. But when he was taken out of the tube, he could no longer feel or move his legs. The medical experts retained by our office reviewed the medical records and imaging studies taken, and from this review they were able to show that Mr. Zeller had a narrowing of the spinal canal from disk tissue pressing on his spinal cord which caused his leg weakness that morning. The MRIs also showed that the pushing and shoving during the transfer caused the degrading disk material to be shoved into the spinal canal, causing immediate and permanent paralysis below the waist.

Because California’s unfair MICRA law limits the damages to $250,000 that can be awarded for pain and suffering to a victim of medical malpractice, in a trial of the case, the loss of use of David’s legs would have been limited to an award of $250,000. Because he did not earn much money, and would have a hard time proving what little he earned, the main damages that remained for a jury to award David for this life-changing injury were the cost of the future life care he required. Based on these factors, on September 30, 2015, we obtained agreement from the U.C. Regents, who employed the physicians who failed to ensure that David’s spine was better protected while at the hospital, and the City and County of San Francisco (CCSF), who employed the MRI technologist that pushed and shoved David from his gurney to the MRI table, to pay David $1.5 million collectively to compensate David for his profound harms and losses.

While David waited for CCSF to approve his settlement and start making the agreed upon payments, sadly his physical and emotional health took a severe turn for the worse. He turned to his physicians at the CCSF medical clinic where he received his primary care, and eventually back to SF General Hospital for help with his increased pain, bowel problems, and depression, but the management of his physical and emotional health was devastatingly poor.

March 14, 2016, as he continued to wait for the Regents and CCSF to honor a settlement agreement reached more than five months earlier, David Zeller hung himself in his tenderloin studio apartment and was pronounced dead on the scene. We may never know all the factors that drove David to do this, but we realize our daily contact and support did not prove to be enough. It was a tragic loss for all of us, and for San Francisco.

When the U.C. Regents and the City and County of San Francisco learned of David’s death – which we contend they likely caused first due to paralyzing him, and then due to failing to provide him adequate care he required as he awaited much needed settlement funds – the Regents and Board of Supervisors decided not to honor the settlement agreement reached with Mr. Zeller. They have yet to pay his heir one dime for what they did to this good man, or one dime to this office for the work that went into advocating for David and arriving at the agreed to settlement.

The San Francisco Chronicle covered this horrible story on the front page of the Bay Area Section. Sadly, to this day, the defendants have failed to honor their agreement reached with Mr. Zeller while he was alive. The Zinn Law Firm fights for its clients until the end. And, when necessary, for its own rights as well. The battle to force the U.C. Regents and the City and County of San Francisco to honor its agreement continues to this day, and we hope that decency and integrity will prevail. However, if an agreement cannot be reached that honors our friend and is fair to our firm, a jury of San Franciscans will be able to decide what a fair resolution will be. The matter is set for a jury trial in San Francisco for November 2017.